What is a Cooling System and How Does it Work


What is a Cooling System?

A typical 4 cylinder vehicle cruising along the highway at around 50 miles per hour,  will produce 4000 controlled explosions per minute inside the engine as the spark plugs ignite the fuel in each cylinder to propel the vehicle down the road.  Obviously, these explosions produce an enormous amount of heat and, if not controlled, will destroy an engine in a matter of minutes.  Controlling these high temperatures is the job of the cooling system.

The modern cooling system has not changed much from the cooling systems in the model T back in the '20s.  Oh sure, it has become infinitely more reliable and efficient at doing it's job, but the basic cooling system still consists of liquid coolant being circulated through the engine, then out to the radiator to be cooled by the air stream coming through the front grill of the vehicle.

How Does a Cooling System Work?

Actually, there are two types of cooling systems found on motor vehicles:  Liquid cooled and Air cooled.  Air cooled engines are found on a few older cars, like the original Volkswagen Beetle, the Chevrolet Corvair and a few others.  Many modern motorcycles still use air cooling, but for the most part, automobiles and trucks use liquid cooled systems and that is what this article will concentrate on.

A cooling system works by sending a liquid coolant through passages in the engine block and heads.  As the coolant flows through these passages, it picks up heat from the engine.  The heated fluid then makes its way through a rubber hose to the radiator in the front of the car.  As it flows through the thin tubes in the radiator, the hot liquid is cooled by the air stream entering the engine compartment from the grill in front of the car.  Once the fluid is cooled, it returns to the engine to absorb more heat.  The water pump has the job of keeping the fluid moving through this system of plumbing and hidden passages.

In order to prevent the coolant from boiling, the cooling system is designed to be pressurized.  Under pressure, the boiling point of the coolant is raised considerably.  However, too much pressure will cause hoses and other parts to burst, so a system is needed to relieve pressure if it exceeds a certain point.  The job of maintaining the pressure in the cooling system belongs to the radiator cap.  The cap is designed to release pressure if it reaches the specified upper limit that the system was designed to handle.  Prior to the '70s, the cap would release this extra pressure to the pavement.  Since then, a system was added to capture any released fluid and store it temporarily in a reserve tank.  This fluid would then return to the cooling system after the engine cooled down.  This is what is called a closed cooling system.

Circulation
The coolant follows a path that takes it from the water pump, through passages inside the engine block where it collects the heat produced by the cylinders.  It then flows up to the cylinder head (or heads in a V type engine) where it collects more heat from the combustion chambers.  It then flows out past the thermostat (if the thermostat is opened to allow the fluid to pass), through the upper radiator hose and into the radiator.  The coolant flows through the thin flattened tubes that make up the core of the radiator and is cooled by the air flow through the radiator.  From there, it flows out of the radiator, through the lower radiator hose and back to the water pump.  By this time, the coolant is cooled off and ready to collect more heat from the engine.

The capacity of the system is engineered for the type and size of the engine and the work load that it is expected to undergo.  Obviously, the cooling system for a larger, more powerful V8 engine in a heavy vehicle will need considerably more capacity then a compact car with a small 4 cylinder engine.  On a large vehicle, the radiator is larger with many more tubes for the coolant to flow through.  The radiator is also wider and taller to capture more air flow entering the vehicle from the grill in front. 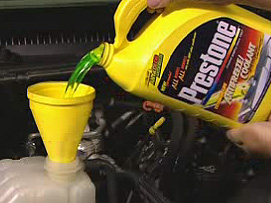 The coolant that courses through the engine and associated plumbing must be able to withstand temperatures well below zero without freezing.  It must also be able to handle engine temperatures in excess of 250 degrees without boiling.  A tall order for any fluid, but that is not all.  The fluid must also contain rust inhibiters and a lubricant.

The coolant in today's vehicles is a mixture of ethylene glycol (antifreeze) and water.  The recommended ratio is fifty-fifty.  In other words, one part antifreeze and one part water.  This is the minimum recommended for use in automobile engines.  Less antifreeze and the boiling point would be too low.  In certain climates where the temperatures can go well below zero, it is permissible to have as much as 75% antifreeze and 25% water, but no more than that.  Pure antifreeze will not work properly and can cause a boil over.

Antifreeze is poisonous and should be kept away from people and animals, especially dogs and cats, who are attracted by the sweet taste.  Ethylene Glycol, if ingested, will form calcium oxalate crystals in the kidneys which can cause acute renal failure and death.

660a5a25278c0a46921fdbb255c38b21@radiatorexpress.desk-mail.com
http://assets3.desk.com/
false
desk
Loading
seconds ago
a minute ago
minutes ago
an hour ago
hours ago
a day ago
days ago
about
false
Invalid characters found
/customer/en/portal/articles/autocomplete